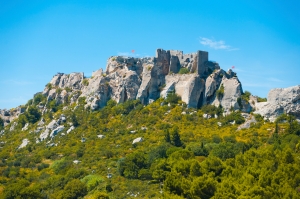 Several years ago, my husband and I were on vacation at a scenic location when we saw a ruin in the distance and decided to hike over and check it out. After following a somewhat treacherous trail for much longer than it we thought it would take to get to the structure, we looked to the horizon and realized the site didn’t seem any closer than when we started. At that point, we began to question if we should continue . . . it was already late in the afternoon, and once we got there we would have to walk all the way back . . . but it looked so cool, and we had already come this far, so we decided to press on. We probably stopped two more times to have a similar conversation before we actually made it to the ruin — which was totally worth the trip, even though it was approaching dusk by the time we wound our way back along a narrow path to return to our car.

I had to smile as a quote I had read several years earlier popped into my head. “Don’t confuse a clear view for a short distance.” Credited to Kevin Kelly, I have had numerous opportunities to be reminded of the truth of this statement. The bottom line is, most major projects take longer, and include more twists and turns, than we expect at the outset. And if we don’t have a clear view of where we are headed, it is easy to stop after the first few bumps in the road and decide the trip really isn’t worth it. But when you have a clear picture of the destination in your head, you are much more likely to press on through the brambles, the steep drop-offs, and rocky paths. Making a commitment to persevere toward a clear view can lead to amazing results — not only when you reach (or exceed!) your destination, but also in the increased levels of collaboration and support that can happen within a team along the way.

The reverse is also true. Without a clear destination in mind, even a fairly easy path can seem overwhelming, or require too much effort. A vague or foggy description of the view doesn’t inspire near the energy or enthusiasm needed to complete the trip. The journey is sure to include numerous uncontrollable variables, and there will be multiple scenarios that could come to pass. You will have to adapt and make course corrections along the way. But when everyone is clear on the ultimate destination, they are more likely to respond to these challenges as simply that — challenges to overcome, not insurmountable obstacles on the way to a fuzzy destination, which have caused many a team to stop short of their goal.

It is true that, as a leader, you should never confuse a clear view for a short distance . . . but you should also never underestimate the power of a clear view to motivate your team to stretch beyond what they might have otherwise imagined.