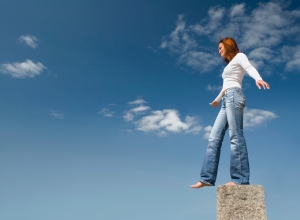 “When you get to the end of all the light you know and it’s time to step into the darkness of the unknown, faith is knowing that one of two things shall happen: either you will be given something solid to stand on, or you will be taught how to fly.” ― Edward Teller

As much as people like to think that leadership is about vision and strategy and building a solid culture and high-performing teams — which, of course are all part of it — there seems to be far less focus on the role that faith plays in effective leadership. While some use the term more generically, as in “I have faith (confidence) in my team to make the best decision”, I believe for many leaders faith from a spiritual sense is also a key driver in their success.

For me, these two types of faith are intertwined. Faith in my people comes from experiencing first-hand their commitment to our clearly articulated values and operating practices (SMAC me), which are built on a foundation of faith. While having confidence in my team is important, I don’t think that is the kind of faith that Edward Teller was referring to in the quote above. Rather I think he is talking about the nudges, the feeling in your gut (divine guidance), the tug on your conscience that compels you to make a decision, even when you don’t know exactly how that decision will play out.

In my experience, you often have to “step into the darkness” before a door will open, or a path will be made clear. For leaders who like to be in control of a situation (that’s not just me, right?!?) making a decision to take a leap into the unknown can cause more than a few sleepless nights. I absolutely believe that when I seek His guidance, God will provide. I also believe He expects us to do our part — which to me means planning, considering scenarios and financial implications, etc. Unfortunately, it’s a bit trickier to figure out when you have reached the threshold of “doing your part.” Because sometimes (okay many times) stepping out in faith involves a fairly healthy level of risk. It is one thing to take that type of risk for yourself, but leaders often have to take such risks on behalf of their board, their staff, and all who turn to them for care — which is an even heavier responsibility.

So how do you know if the tug on your conscience really means you are being called to step out in faith? While I make absolutely no claim of being an expert, in my experience when there is something that you really don’t want to do, and you have done everything you can to rationalize a different course of action, and your gut still won’t quiet down, it’s time to step out in faith. Some of my most “visionary” decisions really weren’t so much about MY vision as the confidence that there was a plan, which would become clear if I would just move forward along the path.

Is it time for you to take that step?