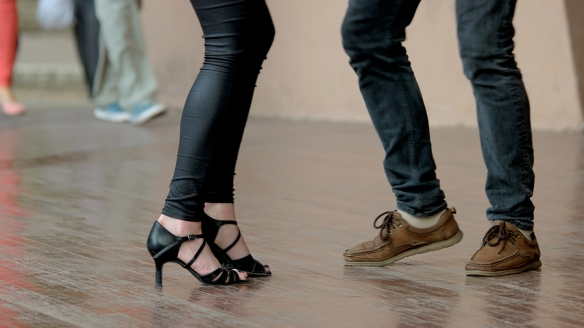 Have you ever started a conversation with or about an individual with the words, “He/you always . . .” or “She/you never . . .”? Such pronouncements are often shared with thinly veiled frustration because, try as you might, you can’t “force” someone to change their behavior . . . right? Actually you can, but not with the threatening or strong-arm tactics you might be imagining. The way we describe the process in our organization is “changing your steps in the dance.”

Notice, I said changing your steps. Any time two people interact, they become part a behavioral dance — one person moves a certain way, and the other responds with a corresponding step. While telling another person they have to change their steps often feels like talking to a brick wall, you have full control over whether you change your steps.

What does it look like when you change your steps in the dance?

• If someone is consistently late to meetings, and you have historically disrupted everyone’s schedule by waiting for them, or taking time to recap what they missed when they arrive, your scolding is unlikely to change their behavior. So change your steps. Start the meeting on time, and don’t offer a recap to late-comers. By not following their “lead”, you might be surprised at how quickly they start arriving on time.

•  When trying to collaborate, if someone comes across as guarded, defensive or not willing to compromise, rather than moving in the same direction and upping the ante, take an unexpected step. Depending on the situation, you might increase your level of openness, ask about barriers you may not be aware of, or express regret that they don’t see the project as a fit for their goals and then move on with those who do.

• For someone you have come to view as a “pot-stirrer”, rather than getting sucked into the drama or totally ignoring what may be a legitimate issue, thank them for their concern for the situation/organization, let them know you will look into it, and then end the discussion. No defending, no questioning . . . simply take the steps of acknowledgement and moving on.

• What examples would you add?

The hardest part of changing your steps is to see the dance in the first place. What might seem obvious to an observer is much harder to see when you are in the midst of an instinctive or habitual response (often fueled with the certainty that you are “right”). Try this . . . the next time you are feeling frustrated with someone’s behavior, rather than focusing on how you want them to behave, stop and ask yourself how you can change your steps in the dance. Remember . . . it takes two to tango.

See you on the dance floor.